On Thursday, the most awaited movie of the year “3 idiots” was released. I had liked Chetan Bhagat’s “Five Point 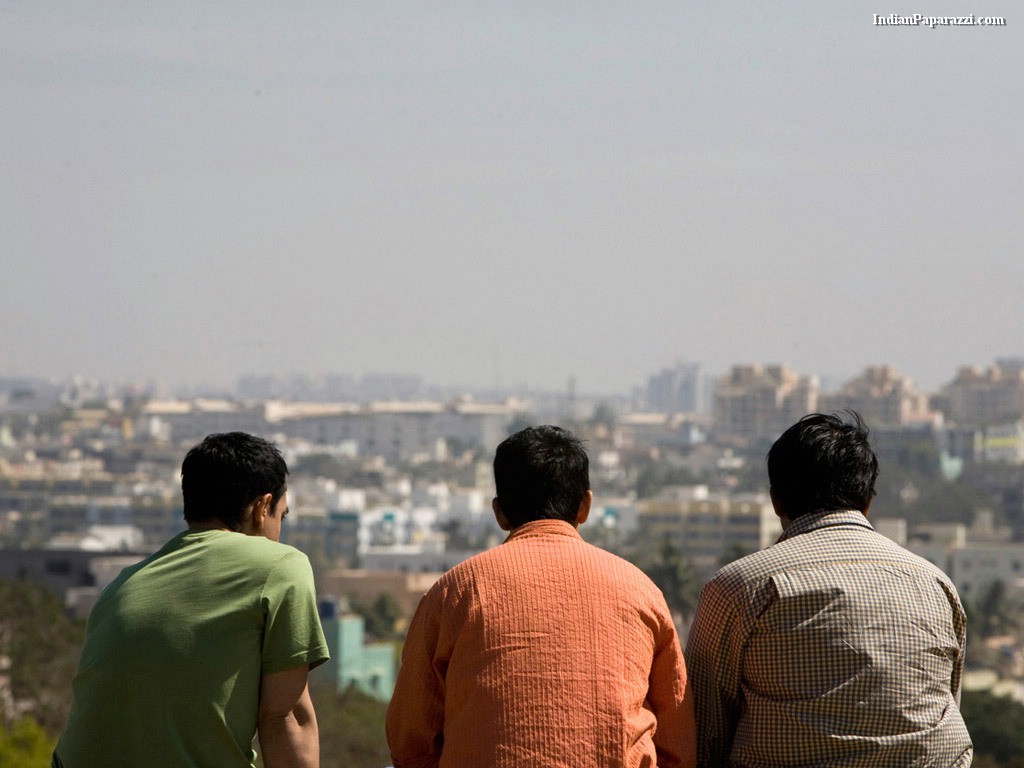 Someone”,when I read it in Engineering Final Year, but somehow, after reading “One night at call center”, I didn’t want to read another one by this writer.  I would not have had high expectations from the Bollywood adaptation of FPS, but Hirani and Aamir’s names made sure that I was eagerly waiting for this movie. So I made use of the vacation time and went for the movie right on the day of its release.

To begin, I’d like to address a few comparisons:

But still, “3 idiots” is certainly one of the best movies released in 2009. Especially, if you have ever lived a hostel-life (specifically, an engineering college hostel life), you can easily relate to many things. The ragging scene ( I was lucky to escape most of that), millimeter (We had an equivalent “Chhotu” in our hostel), the technically-named pups: kilobyte, Gigabyte (We had “Floppy”!!) the no-change attitude of most professors: all this and more reminded me of my days at MNNIT. I also liked the jabs that the movie took at our education-system, the rat-race mentality and “What will the neighbors say?” attitude of the parents. I hope that movies like this one and TZP make parents think twice before forcing their wishes on their kids. The acting is top class: Aamir is beyond any comments, but even Madhwan and Sharman were flawless. And like in all his other movies, Hirani plays at will with the audience emotions: making us cry and laugh whenever he wants.

However, there are some things in the movie, which could have been done a bit better. Just after the intermission, I guess the movie goes too bollywoodish: the story becomes a bit less believable. I won’t disclose the post- intermission twist, but another thing that’s less believable is the fact that Rancho (Aamir’s character) goes on to top every exam. Now, anyone, who knows our education system, knows that a Rancho can’t succeed in reality, not in the exams I mean.  I would have preferred him to barely pass the exams (maybe flunk a couple) and then, go on to succeed in the real world. (Remember Rancho’s book equivalent Ryan?)

Also, I am not sure whether the main characters (other than Rancho) were developed sufficiently in the storyline. Okay, Raju (Sharman) is a God-fearing middle class Indian, while Farhan (Madhvan) loves photography. What else? We never really get to know them. If you’re not convinced, compare and contrast this with DCH, which was no doubt Aamir’s movie too, but all three major characters were developed so strongly that most viewers would relate to at least one of them. (And that’s where I feel that the book scores over the movie.)

And the last complaint that I have with the movie is the same one that I had from the book: I think that Raju’s background (Alok’s in FPS) could have been treated with more dignity. I think that there is a big section from the Indian lower middle class, for which good education of one of the kids, serves as the way out to resolve the family’s financial worries. Hirani could have avoided making fun of this segment at every possible opportunity. It made me laugh at times, but still, somewhere it pinched.

BTW, this review would be incomplete without commenting on the music. I think that standalone, the music could have been classified as “nothing great!”, but the way the songs fit in with the story, makes them more powerful. I can easily imagine “Aal is well!!” to be a college-anthem these days all over India. “Zoobi doobi”  looked a bit out of place in the movie, while “Badal Awara” was likable to listen to (Somehow, the music appeared to be familiar; is it “inspired” by some other Hindi song?)  Even if you don’t like the song for the music or lyrics, you’ll certainly like it for the beautiful visuals of the Himachal. The song that I liked best in the movie was “Give me some sunshine!!”  It’s difficult not to be moved by the lyrics. Specifically, the lines “Give me some sunshine, Give me some rain, Give me another chance, I wanna grow up once again!!” are just too good. But surprisingly , the song that was echoing in my mind when I woke up the next day, was the one which I didn’t notice that I liked that much in the movie: “Jaane nahin denge tujhe!”.  I don’t remember such an intense song from Sonu Nigam, since “Tanhayee!!”  (which, BTW, is one of my all time favs).  I have been listening to these two on repeat mode since I came back from the movie. BTW, after listening to the lyrics of all the songs, I was almost sure that this is Prasoon Joshi’s work. (Did anyone else feel the same way?) Anyways, good work by Swanand Kirkire..

Well, as I look back at what I have written, it seems I have written more negatives than positives. This doesn’t mean that I didn’t like the movie. On the contrary, I really liked it, but wanted to point out a few issues that I had with the movie. (And I know that not many share my viewpoint.) I could have easily ignored these, but we expect perfection from every Aamir Khan movie and as he himself said in DCH: “Perfection ko improve karna mushkil hota hai”. Ignoring these minor negatives,  I really enjoyed the movie. Much more than what my complaints above suggest!!

PS: Strangely, the imdb page for the movie is not up-to-date. Not only one of the character’s name (Sharman’s character name is shown as Hari instead of Raju) is wrong , but it’s also missing a very important character of Chatur. Last status update was on 28 September 2009. 😮

5 Comments on 3 idiots: Entertaining, nostalgic, emotional, but not perfect..